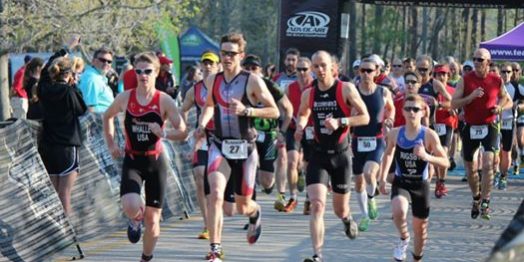 So many races in so many places.  Sometimes there are so many Accelerate3 athletes racing it’s hard to keep track.

In Alabama it was a weekend filled with lots of duathlon racing. At the Double Oak Duathlon Tom Woods started the duathlon season where he left off last year.  Going fast!  He won the long course race in convincing fashion with the  fastest first run, fastest bike split and a big enough lead going into the second run that he was able to cruise the closing 5k.

Chad Williamson raced the short course version of the race.  He took a wire to wire win posting the fastest first run.  Once one the bike he destroyed the rest of the field.  Heading out onto the second run he also was able to cruise through to the tape.

Two races, two racers and two wins.  I like it, their competition probably not as much.

For the second year in a row, Chris used the fastest bike split of the day to solidify his second place overall finish at the Heel n Crank Duathlon. He was about 2 minutes faster this year than last, but unfortunately so was the winner.

Heading north, but staying in the south, Jenny and James teamed up with one of their ICE Racing team mates at the Belews Lake Triathlon in NC.  They managed to annihilate the team competition, even with James’s broken ass. (he really has a broken coccyx.)

Going west where the sun shines often and the temps were warm, Jack, Randy and I did the Leadman Tempe race.  They started the pro’s and M18-34 in the first wave. Jack battled head to head the entire bike, swapping the lead multiple times over the course of the 69 mile ride. He grabbed the overall lead on the bike with about 20 miles to go and held that through the first mile and half on the run. He dropped to 3rd overall and 1st amateur on the day over the hilly run.

After a tough head to head battle over the first 10 minutes of the swim, a poor tactical decision by the guys who were 2nd and 3rd at the time in my wave saw me gap them by :20-:25 rounding the first buoy.  That was the last time I saw anyone in my wave until the awards ceremony.  At the end of the day 3 of the top 9 athletes overall were Accelerate 3 athletes.  That’s never shabby!