A Weekend of Kicking Ass 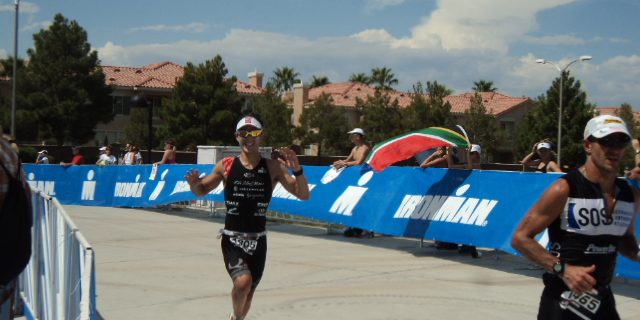 This weekend was filled with quite a few firsts for me. It was the first time both of my EU based athletes were in the same city as I was. The highlight of my weekend was meeting Tom and Nick. It’s pretty awesome to finally put faces to email addresses. Unfortunately I forgot to bring my camera with me to the expo where I was meeting them. Bad coach. Really bad.

This past weekend was the 70.3 World Championships. Both Nick and Tom raced. It was hot. Very hot. You ended up sweating. A lot. You needed to drink a lot of fluids just to stay upright. Lots of people were falling out. And that was just spectating. I can’t repeat what one pro woman said about the heat but it had a cuss word to describe how hot it was.

Tom crossed the line in 5:07 which last year would have been a PB for him. This year though he has raced much faster over the half distance. Still a solid showing on a day in which he set new PB’s for the highest temps he’s ever raced in.

Nick absolutely smashed it out on the course. He finished as the 9th age grouper on the day and comfortably won the Men’s 18-24 age group. Yeah, it’s totally bad ass, he became an age group world champ! I’m not going to lie, when I saw him rounding the corner for the finish and I knew he was way up there both age group and overall, my allergies may have caused my eyes to have a very brief, tiny reaction.

All in all, as a coach I couldn’t be much happier about this past weekend. There was a good bit of success, some cash flowing into the hands of my athletes. It’s a reward for these guys for their hard work and dedication. Most people want to dream big, but when it comes time to put in the hard work, most people settle for a smaller dream. These guys have been doing the work. It’s paying off. Good job lads.