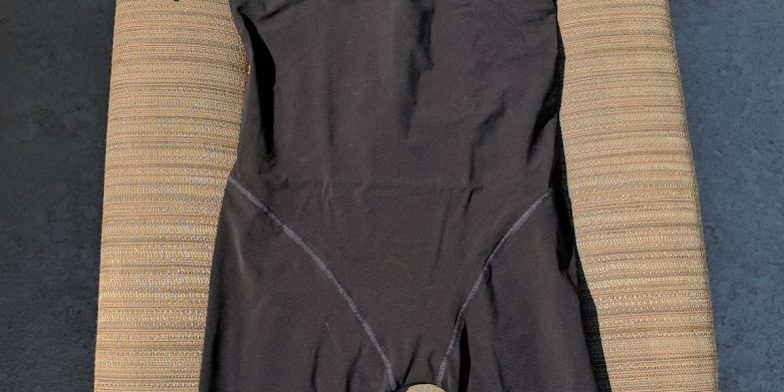 As aero sleeved race suits become more prolific a few problems have cropped up. These issues center mainly around the swim. What do you do with the sleeves in the swim? Do you leave the top down then struggle with the wet sleeves while you run through T1?  Do you swim with the suit pulled up and hope the sleeves are flexible enough to accommodate your swim stroke? So many questions, so few races to find solutions.

Kiwami has solved that problem, potentially, with the Kiwami AQUARUSH, a sleeved swimskin that you can wear over your sleeved race kit.

When Kiwami sent me a few AQUARUSH’s to try out I wasn’t sure what to think. I’ve chatted with a few pro and age group triathletes and got a generally favorable response. A couple of people tested and found sleeved swimskins to be slower vs no sleeves. My original intent was to discover which one of three combos would be the fastest . Would it be a sleeved swimskin, a sleeveless swimskin or my Kiwami ITU compliant Amphibian suit, all with my Kiwami LD Aero Spider underneath. 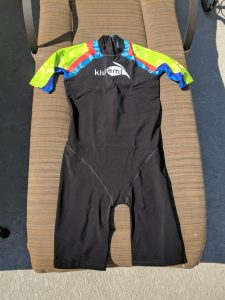 Unfortunately, I did not end up testing all these but it’s not my fault, I swear, it’s not. Just because I can’t find my race kit from the recent move doesn’t mean it’s my fault….does it? What I ended up testing was the AQUARUSH against my Speedo polypro drag suit. Lame given the original intent, but still relevant as I see people at every non-wetsuit swim without swim skins. This would provide a comparison as to how much faster a sleeved swimskin might be vs just race kit. 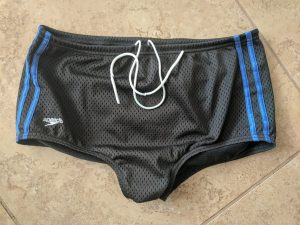 The original plan was to do a cross over test, 4×300’s long course (LCM) on 8:00. I would swim these in the same manner I’d normally start a half or Olympic distance triathlon. Go out fast but controlled through the first hundred or so then settle into an effort I felt I could maintain for about 20 minutes without slowing. I was going to do the first and last one in the Kiwami AQUARUSH and the middle two with just the drag suit. Like the rest of this test it didn’t exactly go as planned. I ended the test after two 300’s since it was clear there was going to be an enormous difference between the two.

Before getting to the results I wanted to comment on some subjective findings during warm up. I swam a 600 mixed stroke warm up in a Small Kiwami AQUARUSH. The first things I noticed was how smooth I was swimming then how high I was riding in the water. I didn’t notice any difference when swimming backstroke but my butterfly strokes seemed longer and felt more graceful. The biggest eye opener was how fast and smooth my breast stroke felt. When I swam competitively there was never a breast stroke race where I managed to finish in the top half of my heat. Ever. Yet in the swim skin I felt like my breast stroke was fluid, long and fast. I’m sure the clock said something else. The best thing one can say about any product they are testing is they never had to think about how it altered their normal behaviors. I never thought about the fact I was wearing a swim skin or sleeves that were tight over my upper arms. 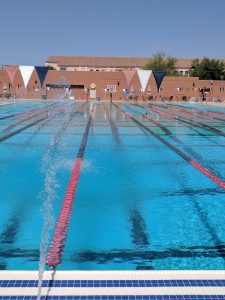 When I finished there was a fair bit of disappointment in that 300. I didn’t want there to be such a huge difference. Even though that second 300 would have made my swim coaches weep in happiness in how I executed it. I nailed my turns, streamlined like an Olympian and had a great first stroke coming out of my streamline on every single wall. It was the best I swam all year when it came to the things that can easily cost you :01-:02/100. I was 1-2 feet ahead of normal off every turn. Yet I still lost :05 per 100. In swimming parlance this is an ass kicking. It doesn’t sound like much but that’s 1:15 in an Olympic, 1:40 in a half and 3:20 in an IM. The reality is, in racing, as the distances get longer those gaps tend to grow. 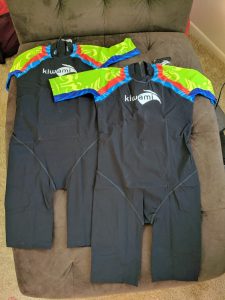 There are several conclusions we can draw from this come race day. The first is that the AQUARUSH appears to be significantly faster than just a regular suit and I suspect a 2-piece race kit. You’ll expend more energy without the suit to go slower. It’s a double whammy, you go slower and your physiological cost is greater. This means as your race swim distance increases the margin of error for the rest of the race shrinks. Can you afford a shrinking margin of error?

The question remains, is the AQUARUSH faster than a sleeveless swim skin with sleeved race kit under it? I suspect given the tighter knit of the AQUARUSH vs aero sleeves on race kit you’ll see a difference. But is that difference going to be :01/100 or :01/500? Stay tuned.