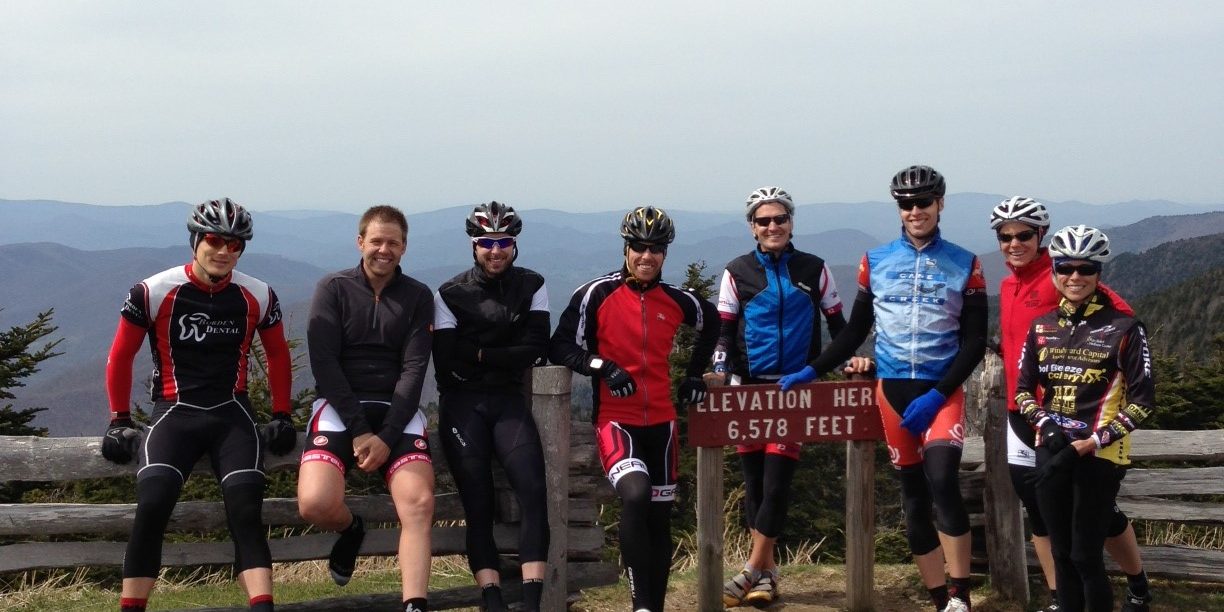 A lot. Don’t try it at home, trust me. What is this? Crashing your bike. The Asheville camp was in full swing and going great. Other’s have written about it.

So what’s so painful about 2.5 hours of swimming? Nothing really, unless you happen to be in the pool which thankfully I wasn’t. I got to video and analyze swim strokes. The runs weren’t painful either.

The climb up Mt. Mitchell, now that hurt, a lot, mainly b/c I’m a fatty who doesn’t climb well. But on the descent, look out, that was fun…for a bit. 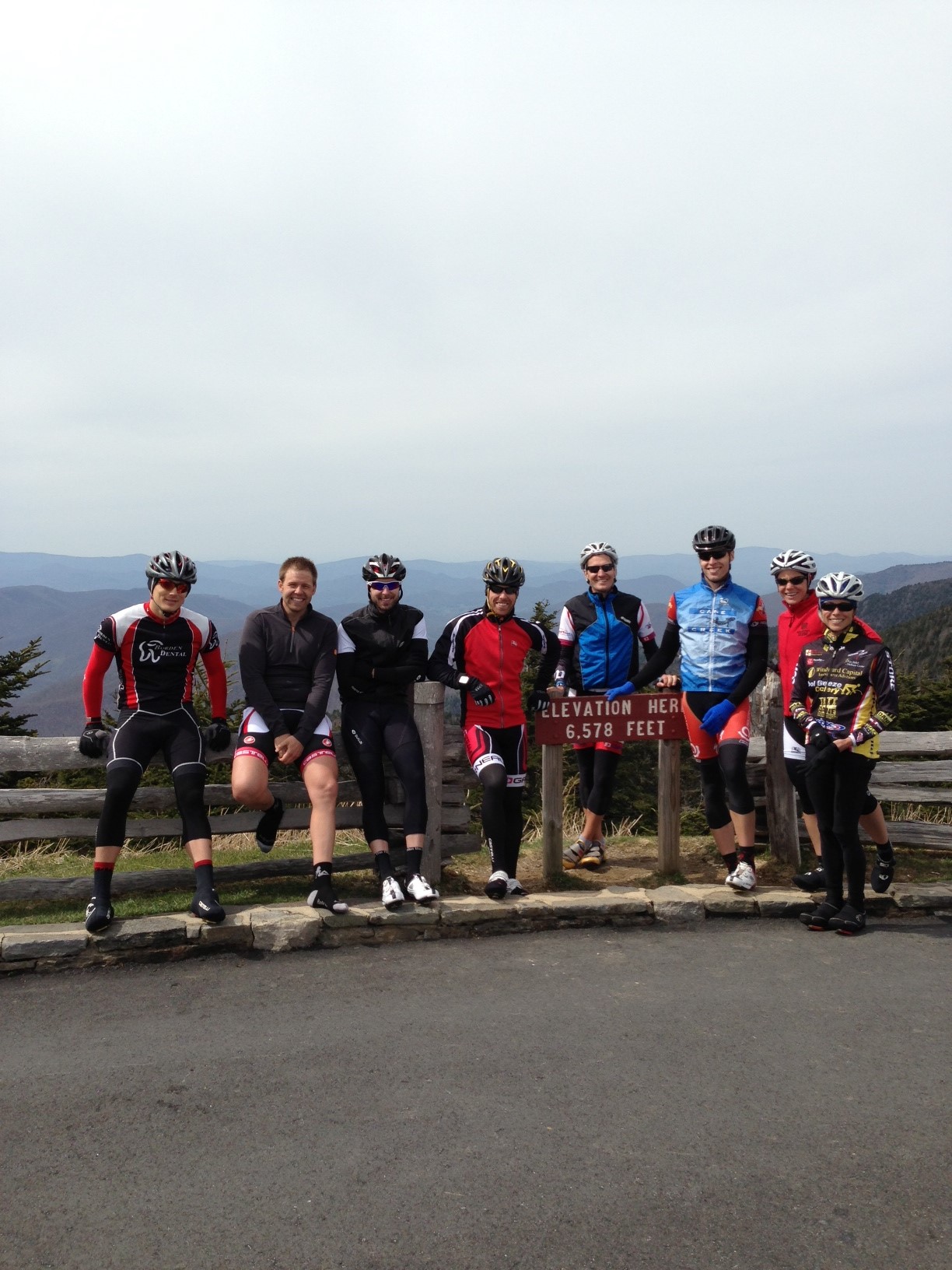 Campers at the top of the climb

Then on Highway 80 coming around a right hand turn I see Heath skidding across the road. A quick check to the right saw James safe then something happened. What I’m not really sure. All I remember is realizing I’m going to crash and trying to get into the sag wagon. About 8 minutes had passed between those thoughts though and that’s scary.

Piecing together what may have happened is tough, there was no one behind me. It’s only after talking with James, Heath and their talks with emergency personnel can I put this together.

It seems in that right hand turn there is a bump or something. Heath hit it and skidded to the left but stayed upright. I guess I thought he overshot the turn or something, I do remember thinking it’s good a car wasn’t coming up the road. It seems I hit the bump as well and I have a recollection of the ground rushing up and me thinking I’m about to crash. It seems I am quoted as saying “oh shit.” When you say that usually good things don’t follow. 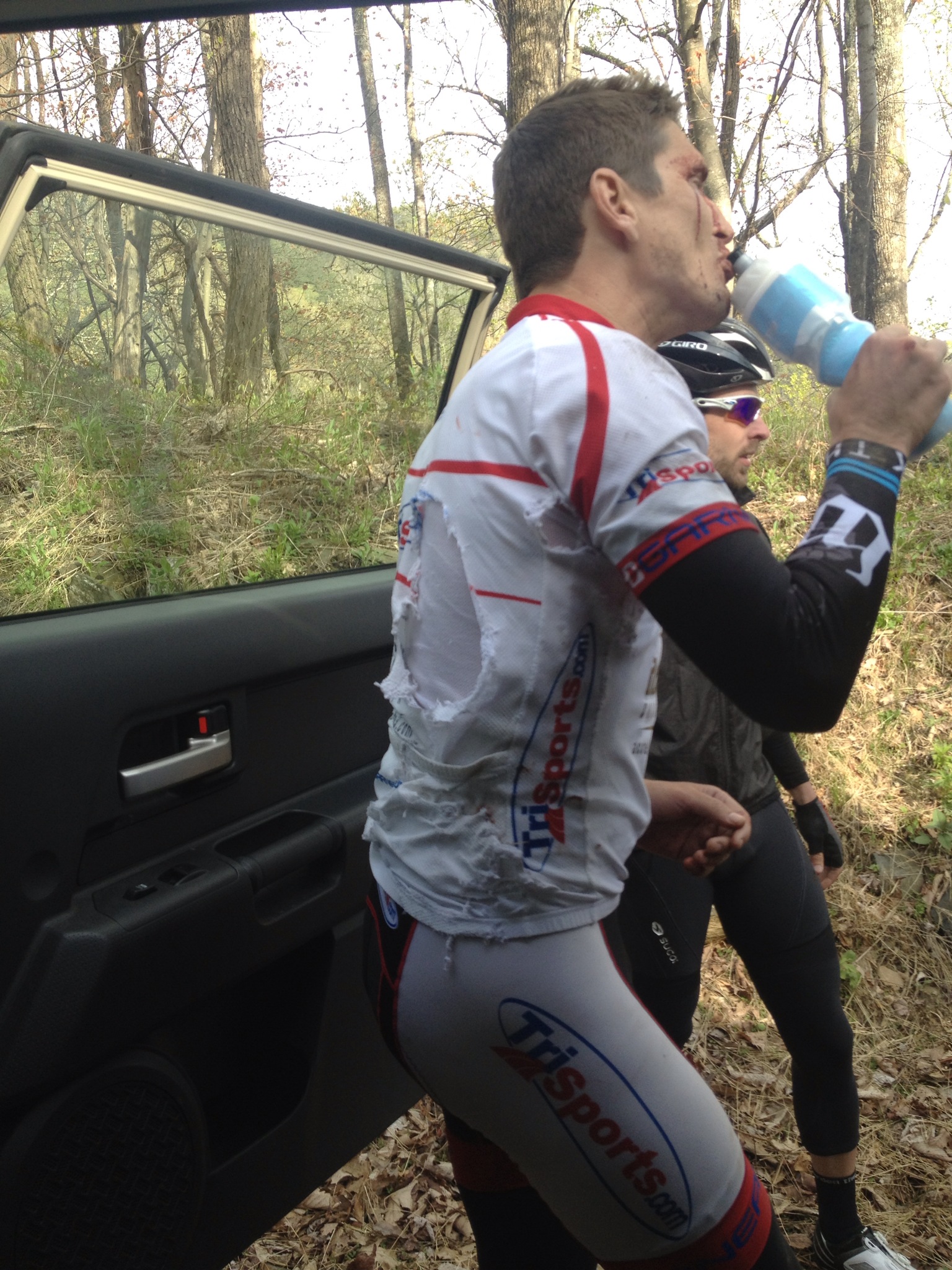 It seems I hit the ground to the left of my line instead of the right if you lost your wheel. So I was basically turned upside down and laid sideways by whatever I hit. I then rolled onto the grass and came to a stop. Was hyperventilating for a bit and started to do a hard reboot. That took a bit. It seems I was being helped to a rock to sit and kept asking “what happened?” I think I meant how did I crash, not literally what happened. I sort of recall laying a bet that I separated my AC joint and didn’t fracture my collar bone. That may have been in the ER. I had a tough time staying awake in the ambulance.

My next actual recollection after the crash is trying to sit in the sag wagon and my thigh cramping along with some pain in my left clavicle, little finger and ribs. Turns out I got a 4 for 1 special out of the crash. A fractured pinkie finger, a fractured rib, and the distal end of my clavicle fractured in 2 places. I was told that I get credit for both breaks in my clavicle. Plus a small amount of road rash. Not a lot thankfully.

The ambulance came and scooped me up, Emily rode with me in the bus and I tried to stay awake. I think I dozed off until the backboard really started hurting my head, upper back and ass. Those things are rather firm and uncomfortable.

The most embarrassing part was during the CT. But I had to pee and when the tech told me he was about to administer the dye and I might feel like I was peeing myself. I told him I should probably pee to be safe. Since my left hand was somewhat mangled and my left arm wasn’t working he had to come cut the strap on my bibs on the rightside so I could get it out and hold the container. I ended up trapping my wanker under my thumb and peeing. Easier said then done. Trust me. I’m pretty confident I fell asleep in the CT machine, or they are really quiet. 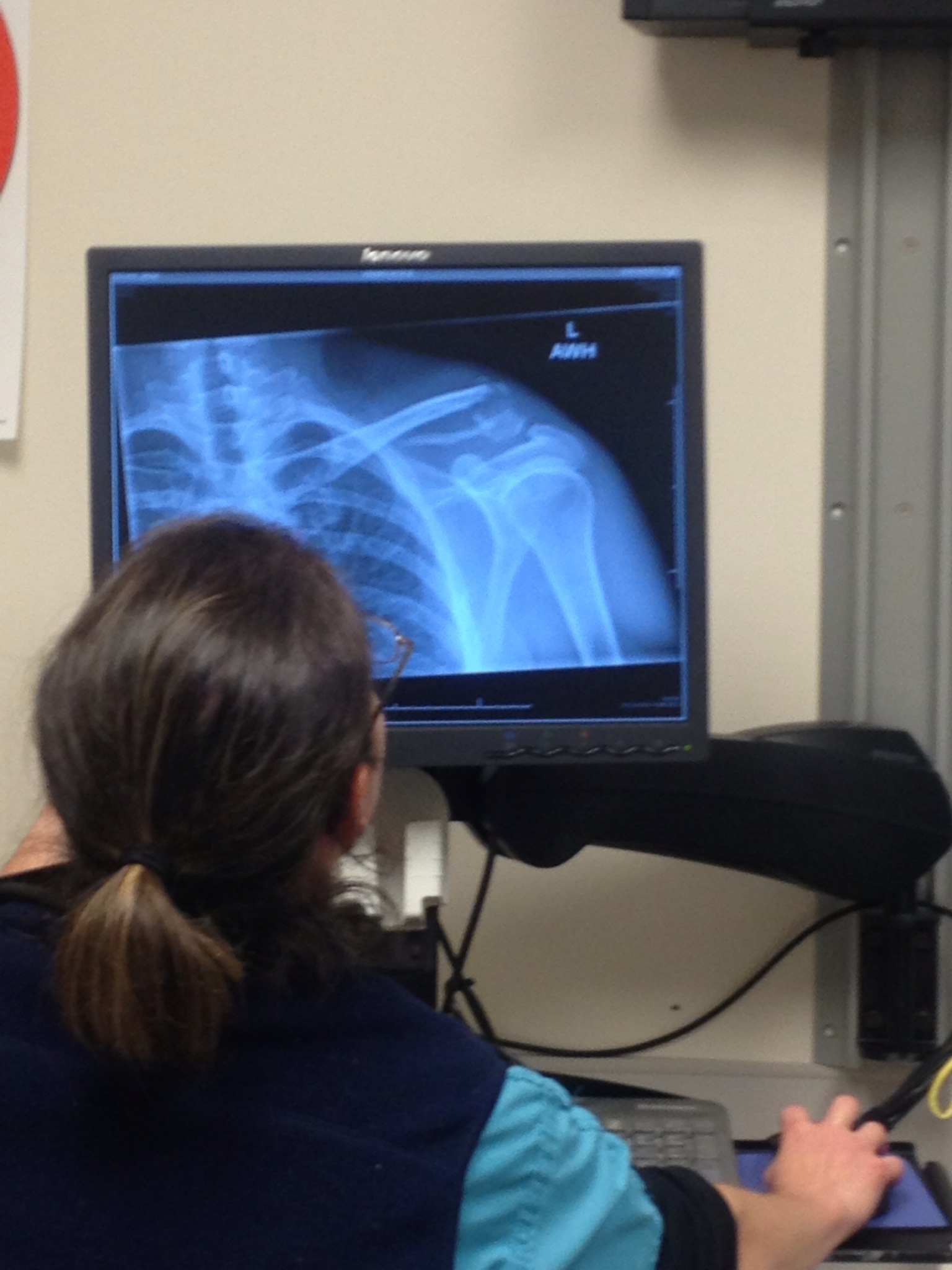 CT’s came back fine, which didn’t surprise me too much. X rays came back with fractures and there too I wasn’t surprised. Hippa didn’t seem to be strictly enforced at the hospital which was fine with me. Better to be in misery with others then by yourself. 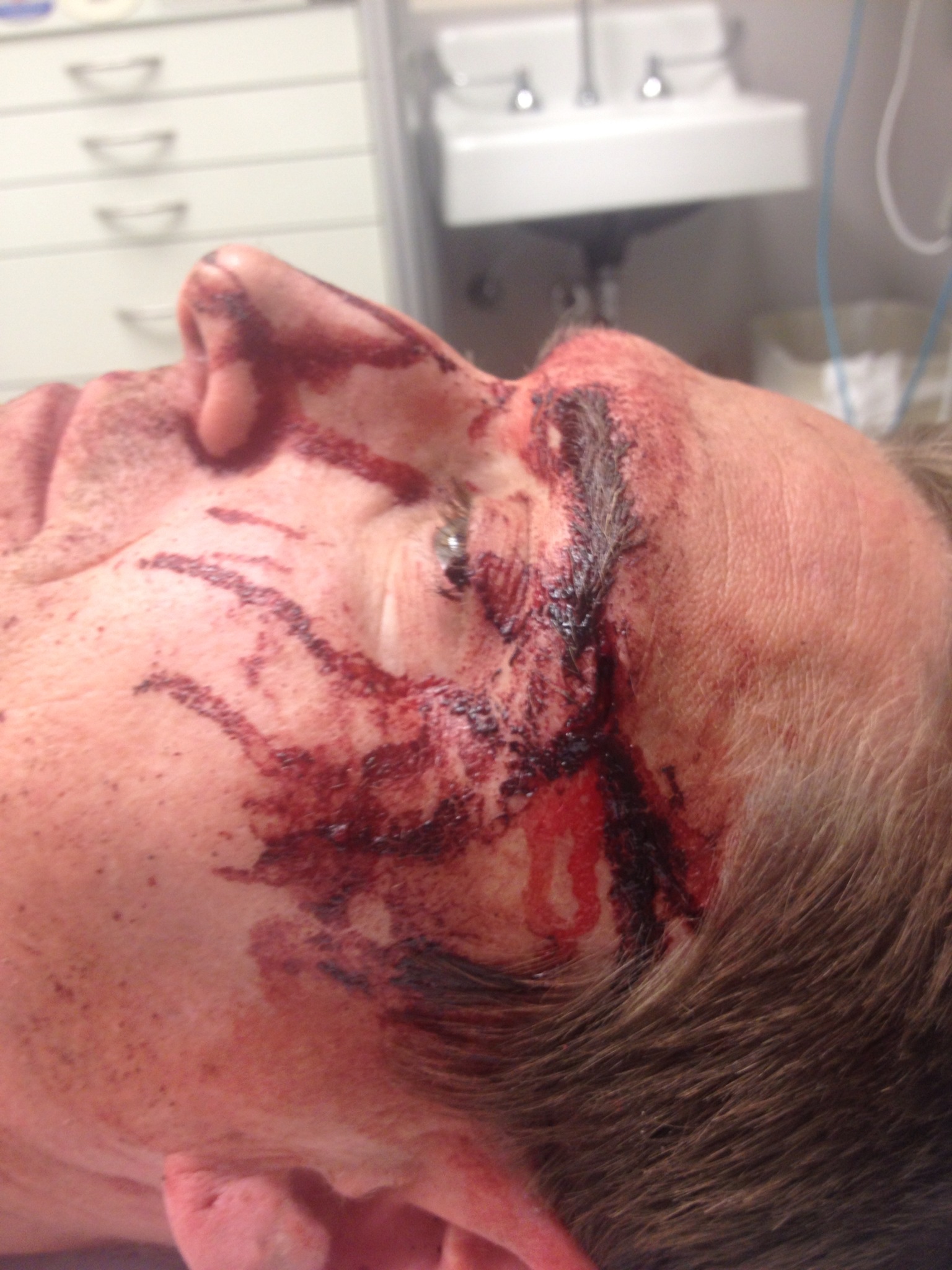 I won the fight, really.

Finally they cut off my undershirt, cleaned me up a bit, bandaged me up and sent me on my way. I tried to get them to verify my insurance using my SSN but they told me to call them. Which I did, they then told me to wait until I get my bills and then submit my card info. You’re a hospital shouldn’t you be trying to get paid sooner rather than later?

Flew back to Tucson mid week, had a Saturday surgery, removed some of the distal end of the clavicle, used bone fragments to rebuild it, used fragments to patch some other spots, a plate, 10 screws, some surgurical cord to lasso the clavicle to the coracoid process, 3.25 hours of surgery and home I went.

I will leave you with some advice. You are going to crash your bike. Try to do it in a soft field at super slow speeds. Don’t do it at 38mph going downhill. Don’t get knocked out. Wear your helmet all the time, you never know when shit is going to happen. It’s probably a good idea to update your emergency contacts in your phone, unlock your phone so people can actually use it, look over your POA and Living Will just to be safe.