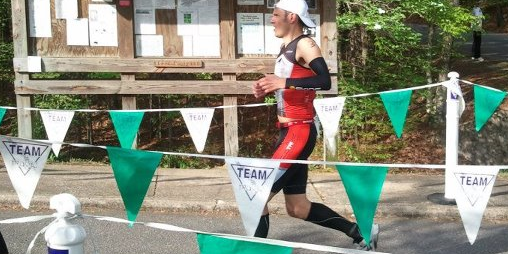 Rich grabbed third in his age group, by posting the third fastest run and bike followed by the fourth fastest second run. Even a 4 minute penalty for riding too far left couldn’t drop him out of the top three.

Chad was second overall in the short course duathlon. He ran solidly posting the third fastest runs of the day then laid down the fastest bike split in the race. You can read his race report here.

Chad, 2nd row in the middle, with an A for Awesome on his kit!

Across the country Billy was placing 8th overall and 2nd in his age group in the Tucson TinFoilman Triathlon. His time of 1:01:06 is one of his better times on this course in the last five years. As he gets older he gets faster.